I’m very picky about how I play my music and videos and have several different media players installed that fulfil different purposes.

One such player is jetAudio Basic which is my primary player for playing folders or playlists. 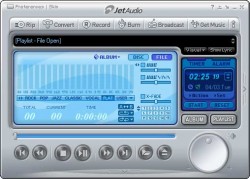 jetAudio comes in a free Basic version and a paid Plus version. Plus adds the mp3/mp3PRO conversion support, recording support and several audio utilities.

However, even the Basic version is feature packed. Besides playing a huge variety of file formats, you can also rip audio CDs, lookup information from the Internet CD Database, convert both audio and video between several file formats, burn audio CDs and record music among others.

What I really love about jetAudio is the ability for it to resume the song from the same point where it was left off, even when the player has been closed. This is the reason that it becomes really useful for a stickler like me.

The download is a bit bulky weighin in at 17.9MB which is the only downside, but to provide you with those features it is well worth it. I do wish they offered a lite version for those who don’t need all the features.

Anyway, if you haven’t tried it out, do give it a shot and let me know how it goes.