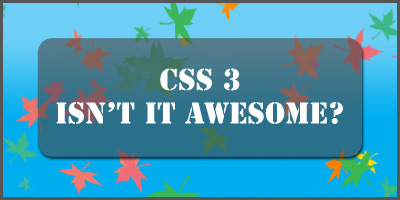 There are plenty of articles out there written by great CSS masters that will tell you about whatâ€™s, why’s and whoâ€™s of CSS. So if you want an in-depth analysis of CSS you’d better off reading an article by Eric Meyer or by some of the other CSS greats out there.

This article is about bringing you up to speed with CSS 3 and how it makes the life of an average graphic designer who has to deal with css on a daily basis, easier.

In truth, I’m no CSS wizard. My CSS programming skills are just a little better than average, at best. I have no problems with converting a design into basic html and CSS and can even hack it for IE6, but that’s about it.

However, CSS 3 has made life a lot easier for most of us designers. And hopefully with the introduction of IE 8, IE 6 will gracefully go to its resting place and the internet will become a better place.

Here are some of the features of CSS 3, for more information you can always check out w3schools or css3.info.

Some downsides: Not to spoil everyone’s fun, but as things stand right now, not all of the new CSS 3 features are supported by all the browsers. For the IE users, most of these features will work only with IE 8. Even for the others, there’s still a short wait until all browsers are CSS 3 compliant.

Not to mention, with all these new features there’s a chance that people will overuse the preset effects.

To quote Chris Spooner from the popular BlogSpoonGraphics,

Just as is done with traditional Photoshop filters, the use of these new styling features could result in some eye-wrenching designs. Drop shadows in particular ring warning bells for us; weâ€™re not looking forward to seeing the Marketing Departmentâ€™s choices with that one!

View all posts by Nikhil