There are times when a number of small video clips are created when one uses the video function in one’s phone or perhaps you’d like to join together a set of mpg clips created by your digital camcorder. If your camcorder or clips are in the MPEG format, you’re in luck – a simple command line will append and merge the clips into a single large clip allowing you uninterrupted viewing pleasure. This is done by using the COPY command and without the need for any external utility.

First, a short disclaimer: This post merely shows you a method. You alone are entirely responsible for what you use it for. There are times when we need to grab media like images, audio and sometimes even embedded video files from various sites.

A new iteration of the popular blogging platform WordPress has been recently released. Codenamed “Baker” after renowned trumpeter & vocalist Chet Baker, the new version has a slew of under-the-hood changes in addition to changes to the Administrative interface: New drag-and-drop widgets admin interface and new widgets API Syntax highlighting and function lookup built into plugin and theme editors Browse the theme directory and install themes from the admin interface Allow the dashboard widgets to be arranged in up to four columns Allow configuring the number of items to show on management pages with an option in Screen Options Support timezones and automatic daylight savings time adjustmentÂ  Support IIS 7.0 URL Rewrite Module Faster loading of admin pages via script compression and concatenation What’s noteworthy about this particular release is the sheer number of support tickets both opened and closed (over 790 in total), which means that the developers have made a conscious effort at listening to what the users’ feedback and issues are and trying to get them resolved. 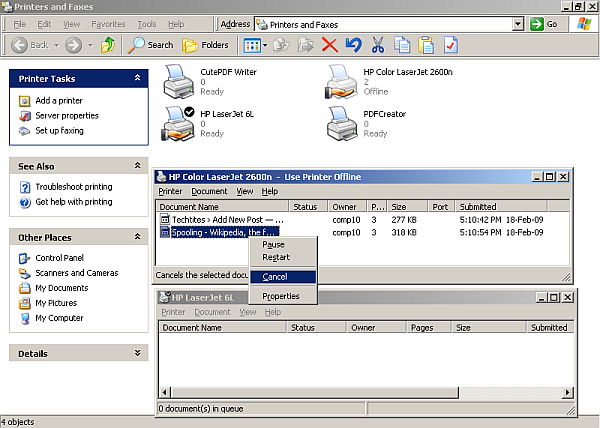 Windows uses Print Spooling to store the print jobs (data sent to a printer) in a buffer, allowing the program that sent the data to the printer to resume its normal operation. Basically, it means that your Word Processor need not wait for the file to print before restoring control to the user. You’re free to work on the document while the printer keeps printing.

So, you’re a conscientious system administrator or even a very neat and tidy home user who likes to keep his/her PC fully updated and patched against any malignant threats that float around on the interweb. Good for you. You subscribe and read so many postings on various security related forums.